“Food adulteration is the process in which the quality of food is lowered either by the addition of inferior quality material or by extraction of valuable ingredient.”

Adulteration means the addition of ingredients which are not permitted in food. They are added because of business profit only. Adulterated foods are harmful for human health as they contain the unauthorized food ingredients. Adulteration in foods also decreases our moral and social value. The flours are adulterated by many toxic substances or by other cheap flours to increase the quantity that will in the end benefits the seller.

The flours are adulterated by many toxic substances or by other cheap flours to increase the quantity that will in the end benefits the seller.

The common adulterants used in wheat four are as follows:

There are two adulterants used in gram flour:

It is commonly known as khesari flour is mixed with gram flours an adulterant.

Lathyrism is a nervous disease that cripples man throughout his life. This disease is known to result from an excessive consumption of the Khesari flour (Lathyrussativus) which is a hard crop with wild growth and drought resistance and is cheaper than other conventional pulses.

It is the Toxic non-permitted food color used extensively in Asian countries as food color. It disturb Central Nervous system and can also cause Paralysis

It is commonly used as adulterant in gram flour especially in Bengal.

To increase the brightness of gram flour for look like a better quality.

Semolina is the purified white middling of durum flour. White middling is actually the product of wheat milling process that is not the flour.

Following are some standard that should be confirmed for semolina:

Adulteration of Sugar and Flour

Food adulteration is the process in which the quality of food is lowered either by the addition of inferior quality material or by extraction of valuable ingredient. A food item is said to be adulterated if: A substance which is added is injurious for human consumption.

Food adulteration is the process in which the quality of food is lowered either by the addition of inferior quality material or by extraction of valuable ingredient. It not only includes the intentional addition or substitution of the substances but biological and chemical contamination during the period of growth, storage, processing, transport and distribution of the food products, is also responsible for the lowering or degradation of the quality of food products.

In the past few decades’ adulteration of food has become one of the most serious problems. Consumption of adulterated food causes diseases like cancer, asthma, ulcer, etc. Majority of adulterants used by the shopkeepers are cheap substitutes which are easily available.

Adulterants are those substances which are used for making the food products unsafe for human consumption.


Adulteration poses several health hazards which include health diseases, weakening of the immune system and lots more. Here are some more harmful effects:

Chronic health problems: There are many mineral oils which when added to the food items can result in paralysis, cancer etc. If pregnant women eat such food items, it might lead to abortion or even damage the brain of the baby. Sometimes zinc substances result in vomiting or in severe cases it can result in diarrhea

Impurity in the food: As adulteration alters the composition of the food item, it increases the impurities thus making them imperfect for the consumption.

Lack of nutritional value: Ready-made food is made using poor quality ingredients which not only brings down the nutritional content but can have a change in taste as well if kept for a long time.

A sweet crystalline or powdered substance, white when pure, consisting of sucrose obtained mainly from sugarcane and sugar beets and used in many foods, drinks, and medicines to improve their taste. Also, called table sugar.

Chalk is a soft fine-grained white sedimentary rock consisting of nearly pure calcium carbonate, containing minute fossil fragments of marine organisms, usually without a cementing material. It is use as adulterant in sugar to increase its weight, to improve its color, etc.

Side Effects On Human

In one sense, the main ingredients of this dust are non-toxic, which simply means they do not pose a threat when ingested. In another sense, this material can and does accumulate in the human respiratory system, which means it can create long-term health problems due to overexposure. In short, swallowing a piece of white chalk won’t kill a person, but breathing in the dust for a number of years can create or trigger respiratory problems. It can also cause stomach disorder. Calcium carbonate accumulation causes a kidney stones. Dietary calcium binds with oxalate in the gut and also in the urine, thus forming a compound that cannot be absorbed. If your dietary intake of calcium is low, this allows more free oxalate to be absorbed in the gut and excreted via the urine. For those who form calcium oxalate kidney stones, reducing dietary calcium would therefore increase stone risk. 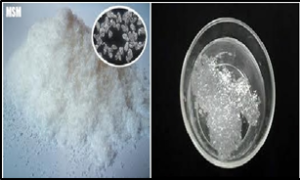 Adulteration of various insoluble Substances in sugar can cause serious problems as it can cause kidney stones.

Take small amount of sugar in a test-tube and shake it with little water. Pure sugar dissolves in water. But insoluble impurities do not dissolve.

Urea is a white crystalline powder with a cooling saline taste. Urea occurs naturally in mammals and is an excretory end-product of amino acid metabolism.  Urea is formed in the liver.

Uremia – kidney failure – causes a buildup of urea in the blood as the kidney eliminates urea from the blood into the bladder. The specific effects of Urea on cell metabolism are probably numerous as the symptoms: anorexia and lethargy, and late symptoms can include decreased mental acuity and coma. Other symptoms include fatigue, nausea, vomiting, cold, bone pain, itch, shortness of breath, and seizures.

Detection: On dissolving in water, it gives a smell of ammonia.

All purpose flour is made from hard or soft wheat flour and is a blend of various types of wheat grains having different protein strengths, and is also generally enriched with vitamins and minerals.

Boric Acid is a weakly acidic hydrate of boric oxide with mild antiseptic, antifungal, and antiviral properties. Boric acid is an inorganic acid which is mainly available as white odorless powder in crystalline form. It dissolves easily in water. The exact mechanism of action of boric acid is unknown; generally cytotoxic to all cells. It is used in the treatment of yeast infections and cold sores.

Side Effects of Boric Acid

People who have eaten boric acid have had nausea, vomiting, stomach aches, and diarrhea. Diarrhea and vomit may have a blue-green color. Eating extreme amounts has resulted in a red, “boiled lobster” like skin rash, muscle contraction followed by skin loss. People who breathed in borax had a dry mouth, nose, and throat.

Take a small amount of sample in a test tube, add some water and shake. Add a few drop of HCL. dip a turemic paper strip if it turns red, boric acid is present.

Bran, also known as miller’s bran, is the hard outer layers of cereal grain. It consists of the combined aleurone and pericarp.

Along with germ, it is an integral part of whole grains, and is often produced as a byproduct of milling in the production of refined grains. When bran is removed from grains, the grains lose a portion of their nutritional value. Bran is present in and may be in any cereal grain, including rice, corn (maize), wheat, oats, barley, rye and millet. Bran is not the same as chaff, coarser scaly material surrounding the grain but not forming part of the grain itself.

Side Effects of Bran

Sprinkle on water surface. Bran will float on the surface.