With the recent occurrences of the British Petroleum (BP) oil spill reaching historic levels, the question of alternative energy is more relevant now than perhaps any time during American history. Fossil fuels have become the world’s leading source of power since the discovery of petroleum in the 1860s. The accessibility was never called into question for more than a century after its inception. Nevertheless, the 1973 oil crisis brought this problem to the fore. With the widespread knowledge that oil and gas supplies will inevitably expire, the public has turned to find renewable energy sources. Moreover, fossil fuels are amazingly destructive to the environment. The burning of oil for power creates great amounts of carbon dioxide, a greenhouse gas that contributes a great deal to the greenhouse effect. The Great London Fog of 1952, wherein over 12,000 people died of smog inhalation, was the result of coal-burning. Additionally, power plants and factories are known to dump their waste into lakes and streams, consequently fouling the water and killing whatever marine life may reside therein. (Wengenmayr 2008) Finally, the 1989 spills of the Exxon-Valdez tank constituted an environmental catastrophe with BP on a scale not known until 2010.

Over the past few decades, three alternative energy sources have become the most well known: solar, wind, and hydroelectric power. Of course, the main point of support is that there is an unlimited supply of air, wind and water; just as significant is that they all generate minimal emissions. All three have attracted controversy as being unreliable, costly, and aesthetically unpleasant. Granted, though they have their faults, many researchers believe alternative energy sources are ultimately preferable to fossil fuels and could potentially offer an alternative to the country’s steadfast reliance on oil. 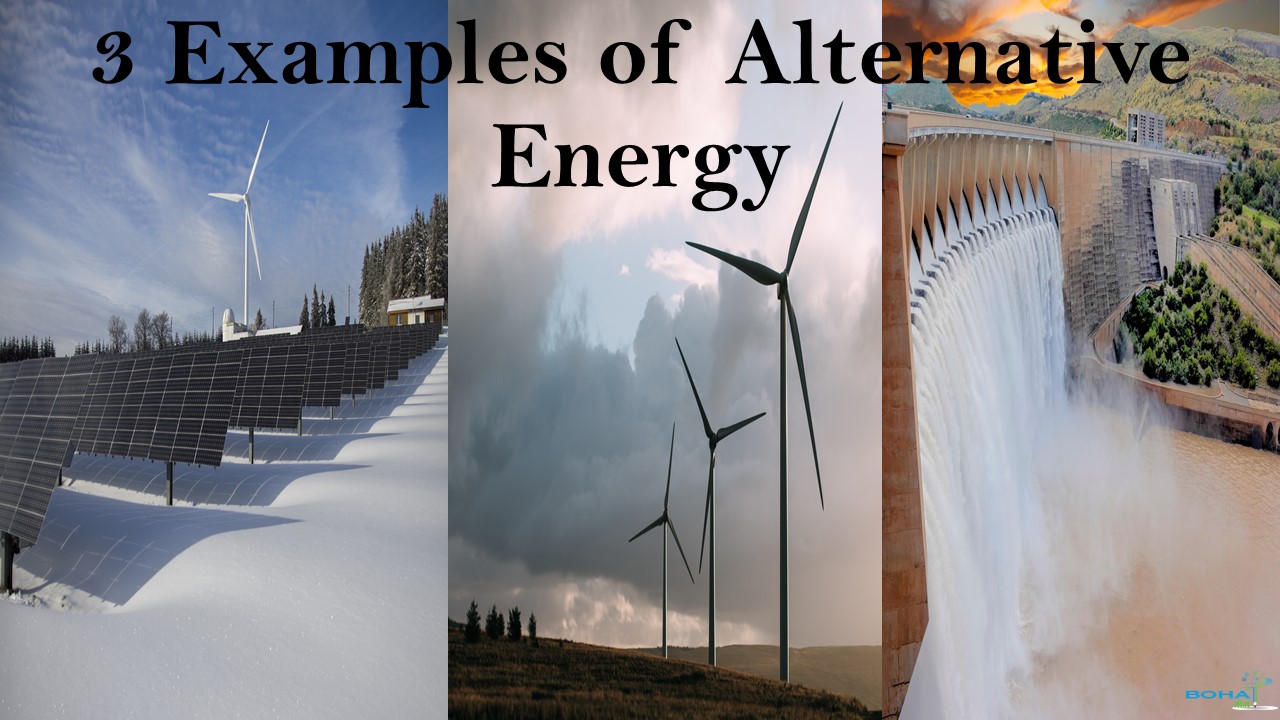 Solar power is the most popular alternative source of energy. Solar power is, in reality, “the original source of energy for all human activity … through growing plants. Solar energy’s main human application throughout most of history has thus been in agriculture and forestry, via photosynthesis. (Gibilsco 2006, pg. 34)”. Two forms of solar energy are available: passive and active. Passive solar energy, which can be used without the use of mechanical systems, has been used for centuries, mainly as a source of heat. Active solar energy has only been fully developed in the last half of the twentieth century and refers to the type of power that requires outside assistance (such as photovoltaic cells and parabolic mirrors) to be utilized. Solar power requires special types of energy cells, known as photovoltaic cells, to be properly harnessed. Unfortunately, such cells are rather expensive to make and only have a maximum energy efficiency of 16%. (Wengenmayr 2008)

A popular myth is that the amount of energy required to create these cells exceeds the amount of energy they produce in their lifespan. In actuality, they “pay off” their energy debt (so to speak) in two to six years, depending on the energy efficiency of the cell. Moreover, the average lifespan of a photovoltaic cell is thirty years. Another popular myth is that these cells do not work on cloudy days and at night. This is untrue – they continue to take in whatever light is available, but in drastically reduced quantities. The cells are also hooked up to batteries that store energy in great quantities, which provides a steady flow of energy day and night. Interestingly enough, solar power also creates the other two alternative energy sources: For example, wind is caused by the sun heating the earth unevenly. Hot air is less dense, so it rises, causing cooler air to move in to replace it. Hydroelectric power can be ultimately traced to the sun too. When the sun evaporates water in the ocean, the vapor forms clouds which later fall on mountains as rain which is routed through turbines to generate electricity. (Chiras 2009). And since “about one-fifth of all energy used around the world now comes from solar resources (Chiras, 155)”, it would not be too far for one to say that it is possible to increase that percentage to a majority.

The second most well-known alternative energy source is wind power. Long a staple of agriculture, the first windmills appeared in Persia about 200 B.C. and originally used to pump water and mill grain. A great deal of time later (and after much redesign), they were immortalized by Miguel Cervantes in his epic Don Quixote, and came to be seen as symbols of rural areas. In the early part of the twentieth century, farms came to use them in conjunction with electric generators as a cheap power source. In the 1930s, the Jacobs Electric company created the modern three-bladed wind turbine and pioneered the advent of wind technology. Wind farms comprised of dozens of turbines are mostly prevalent in California and other windy areas, and large turbines are being built offshore to take advantage of tidal winds. A major proponent of this alternative energy source is the never-ending supply of wind; as a matter of fact, the “global wind energy potential is roughly five times the current world electricity use (Analysis of Wind Energy, 26)”. Like solar cells, wind turbines are also hooked up to energy-storing batteries, which provides for days when there is not as much wind.

The main complaints against wind power are both aesthetic and practical in nature. First among them is the claim that wind turbines are unsightly and contribute to “visual pollution”; another is that the heavy motion of the rotors are incredibly loud and jarring. A third large point of contention is the fact that turbines kill a great amount of birds and bats. However, one should take into consideration the fact that automobiles, power lines, and tall buildings kill more birds than all the windmills in England put together. Additionally, oil refineries are very unpleasant to look at, more so than wind farms; additionally, they foul the air and water, thereby killing more wildlife than windmills ever could.

Water power has the distinction of being one of the oldest and most widely used sources of alternative power in the world today. It is also one of the most abundant; it is estimated that “potential hydropower developments…exceed one million megawatts (Peavey, 1998, pg. 8)”. Since ancient Rome, people have used rivers and streams to power water wheels. The first true hydroelectric plant was constructed in Appleton, Wisconsin – a waterwheel on the Fox river that powered two paper mills and a house. Dams help in the process because they slow down and moderate the water flow. Rivers as a whole are unreliable, as there is the possibility of flooding or drought causing the river level to drop. Dams, on the other hand, create reservoirs and allows a steady flow through the turbines. The main advantage of hydro systems is their ability to handle high peak loads during the season (as well as daily). In practice, the use of stored water is sometimes complicated by irrigation requirements that may occur at peak electrical demands out of phase. Drought periods may cause serious problems, as water replenishment levels may not meet the required rates of use. (Walker 2007)

Another concern is their environmental impact. When a river is dammed, the water backs up and floods out a lowland area, which greatly disrupts the local ecosystem. Dams also have been found to block access to salmon spawning grounds. Those constructed in canyons have been known to completely fill up the gorges, thereby resulting in the loss of many beautiful and historical sites. Cost is the first and foremost counter-argument: the cost of building, installing, and connecting alternative energy facilities is far greater than that of simply maintaining the fossil facilities already in use. Granted, while it would undoubtedly be costlier now, in the long run it would save a lot of money. The peripheral needs of fuel – drilling, refining, and distribution (not to mention health insurance, safety precautions, and worker’s compensation) – would not be a factor in alternative energy facilities. Considering their energy potential, minimum amount of pollution, and near-endless renewability, alternative energy are an immensely preferable option to fossil fuels.

The above examples of renewable energies present clean alternatives sources can become commercial products in the future. The benefits of renewable energies are beyond doubts as they contribute to a big cut in the emission of CO2. Indeed, when a great progress of civilization is takes place, energy is the key to sustainable development. Most human activities such as domestic life, agriculture, industry and transport have always been indispensable. They can help developing countries become more energy self-reliant and provide industrial growth and an improved standard of living.

The strong and centralized fossil fuel supply dominates today’s energy system. 80% of them are consumed in industrialized countries, accounting for 80% of carbon emissions, the main cause of the greenhouse effect. In 2050 the world population is expected to double and the result will be that by the middle of the 21st century, energy consumption will double.  The renewable energies will surely be needed when a big increase in the demand of energy takes place.

Chiras, Dan. (2009) Power from the Sun: A Practical Guide to Solar Electricity. New Society Publishers.  This source examines the role of solar power in contemporary society. It offers solutions for homeowners, as well as examining the broader social implications of solar power to the country and international community.

‘ EWEA Executive summary “Analysis of Wind Energy.’ (2007) Wind Energy Association.https://www.ewea.org/fileadmin/ewea_documents/documents/publications/WETF/ Facts_Summary.pdf EWEA Executive summary.  This source is a comprehensive investigation in Wind Energy sources. It examines their relevancy in relation to traditional sources of energy it relation to cost, functionality, and environmental concerns. It does not formulate a political response, but instead considers the costs to implement wind power long term.

Peavey, Michael (1998). Fuel from Water: Energy Independence. Merit Products.  This source considers the nature of Water Energy. While it is a highly politicized account in its promotion of alternative energy sources, specifically water power, it also offers a detailed statistical account of the means that water power functions and could be implemented in place of traditional energy sources.